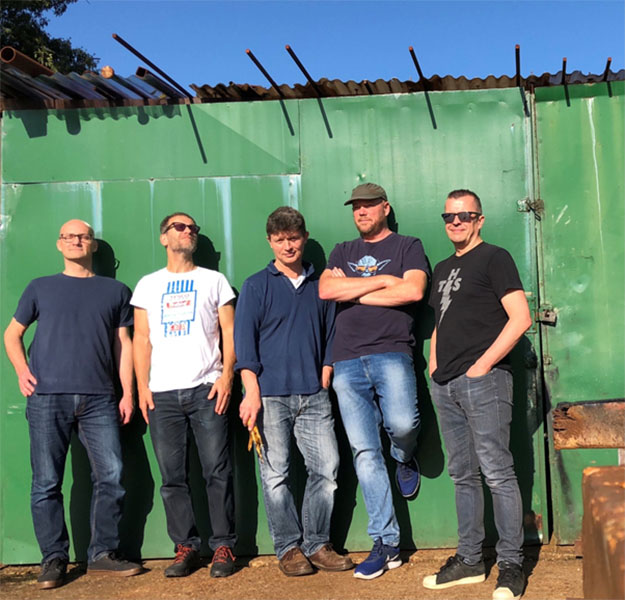 Vernons Future seemed to play it for fun as they put it, but they are actually consummate musicians who have contributed Indiedom with well-arranged, rich tracks with mainstream feel. Their song Honeysuckle Love is my favorite because of its nifty dynamics and nostalgic vibes. Upon invitation, Andy, the guitarist, chose to answer from my list of prepped musical questions, which I am excited to share with you all.

"So we started life as The Vernons, way back in 1985 in Liverpool. We are an indie band – that is ‘indie’ as a musical genre, as well as being ‘independent’! At various times we have been a 4-piece, an 8-piece, and the current 5-piece ‘classic’ line-up. We originally operated in Liverpool from 1985 to 1990, and split just after our album came out on local indie label Probe Plus, home to loads of interesting bands, most famous of which is Half Man Half Biscuit. We reformed in 2015, changing our name to Vernons Future to recognise that we were a changed band with a different line-up.

Band members have worked with loads of people including Kevin Ayers, The Coral, The Wizards of Twiddly and The Weave."

How do you organize yourselves as a band and come up with great tracks?"

"Usually, Simon our singer will turn up at a band practice with the basis of a song on rhythm guitar and a vocal line. From that we will jam ideas around it and develop various other parts.  Recent recordings with people doing their parts at home have allowed for more experimentation on the various parts, which has been a lot of fun."

"I think we all agree that the bit where we all first start to play a song is the most fun – if you get a ‘hairs on the back of your neck’ moment, you know you’re getting somewhere with that one. That’s the moment to watch for!  It’s always the new songs that we enjoy playing most."

"When we played our first festival in Sefton Park in Liverpool we were a 5-piece.  We decided to open the set with a song that has a keyboard intro and Jon the keyboard player went out first, on his own, and fired up the intro.  The rest of just hid off stage and watched his panic building when we didn’t come on.  Left him out there for a fair old time I think. Naughty!"

"We supported the legend that was Frank Sidebottom a couple of times back in the 80’s.  Lovely guy, used to turn up at the venue with the big head in a bass drum case. The audiences were very generous to us and pretty wild!"

"1. It’s Come Round To That Time Again - this is off the debut album and the brass section guys really nailed it with this one. The interplay towards the end between the sax’s and the trumpet is beautiful

2.  Just Can’t Help Myself – we’d been playing this one live for a while before recording it, and the recording just seemed to bring it to life. Almost like we hadn’t really listened to it before...

3.  B Movie – this one was born during the first lockdown and really opened our eyes to how we could develop with the recording process. It was all recorded remotely at our various homes. Prior to this it had been a bit old-school - in the studio, play your parts. This approach allowed for experimentation and development of ideas." 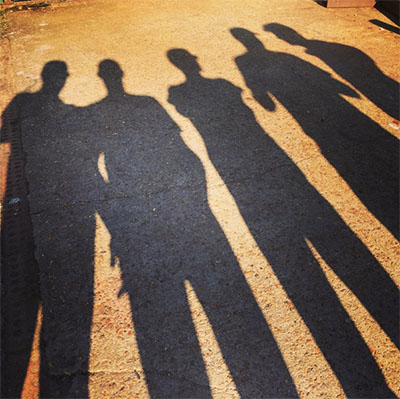 "One of the most memorable has to be this. When we first got together, after a couple of years playing lots of gigs in and around Liverpool we finally got the chance to play a gig in London, probably 1986-ish. This was a BIG deal for us – you know, streets are paved with gold etc. etc.!

We shared a coach down with a punk band from Birkenhead, and it turns out that the venue in New Cross is a hardcore punk venue. We are a few things, but hardcore punk isn’t one of them.  Time comes to go on, and the audience is looking mean! So, after a quick band crisis meeting we decide that the only approach is to play everything as fast and trashy as we can. Don’t ask me how, but it worked!"

"Andy loves his little Vox amp with all the effects built in. Jon has what seems to be a revolving door of keyboards, and Tom has just got himself a handsome new Roland e-drum kit – which features for the first time on our new single Holy Joe."

BONUS Q:  What one word best describes you as a band?

"Fun! We don’t take ourselves too seriously..."