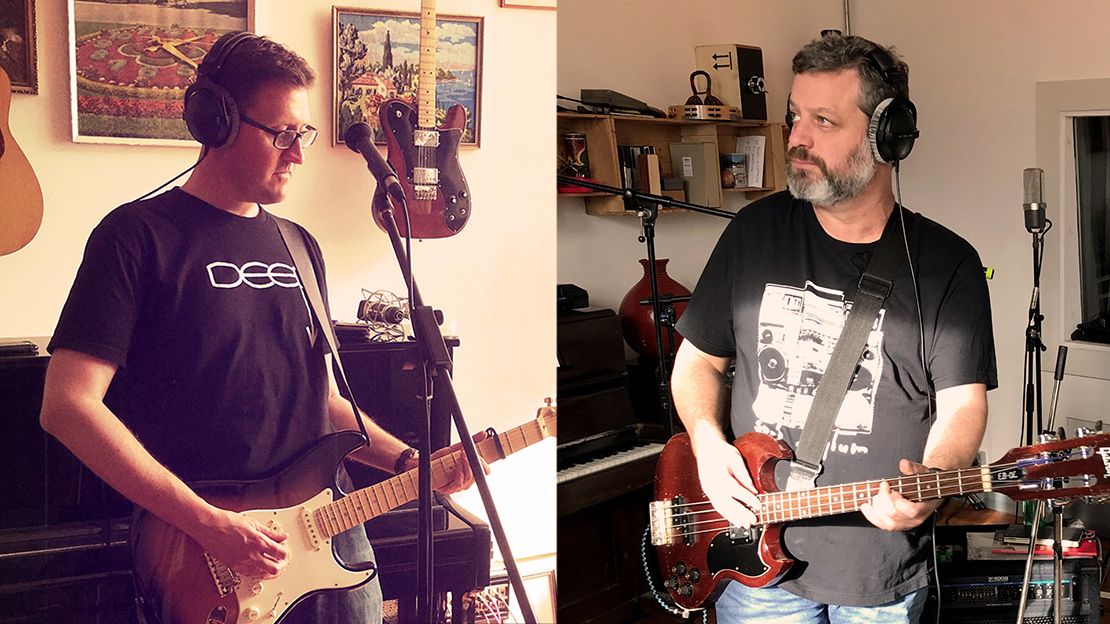 Dynamic musicianship is one of the scores of Fendahlene. Rocking out the Indiedom with upbeat, masterful renditions, this compelling duo established strong teamwork that stood the test of time (and distance). They know what they want in music, and they do it with keen spontaneity, an impression that I can hear while listening to their tracks. Upon my invitation, the clever-humored bass player, Ashley, took charge to answer some from my list of prepped band questions, which I am excited to share with you:

"Hello, we’re Fendahlene. After playing as a three-piece for many years back in Australia, we’re now based in the UK and there’s two of us – Paul, who is the lead singer and guitarist, and Ashley (that’s me) on bass. Our genre is a bit tricky to nail down, I guess indie rock is probably the closest although when it comes down to it, we’re just a rock and roll band. I mean we’ve been told more than once that we’re too commercial for indie and too indie for commercial! As for labels, we have our own imprint called Poverty Records. We thought it was an appropriate name back in the 90s when we were struggling to pay for everything. And unique. As it turns out, according to Discogs, ours was the twelfth label with that name. Oh well …"

"That’s a super tough one. For an epiphany, I suppose it was when we remixed our first EP Blue Fortress. We had worked with an engineer for our original demo and this EP (more on him later) where everything took so incredibly long to do, it was insane. Anyway, we weren’t happy with the mix, as it was compressed to within an inch of its life, so we took it to another engineer, who remixed it pretty much from scratch so incredibly quickly that we didn’t know what to do with ourselves. Like we’d literally taken time off work thinking it would take forever to do, and we didn’t need any of it. We thought having grown up on stories of bands spending six months in the studio to record an album etc. that these things should take forever, so to be shown that these things could be done with efficiency and speed really changed our approach to recording and music-making in general."

"I think for us what we like about it is the studio time. We’ve always been a studio recording band and remain so, even though so much of the process can now be done at home. We always try to choose studios with great rooms and gear (and engineers, super important), and that combo provides such a great creative environment, especially when you’re in there for a few days in a row, from morning to evening. Its super immersive once you’re in there too, I mean we’d happily spend 6 months of the year recording…"

"I can’t speak for Paul but mine is my Gibson EB-OL bass. It’s rickety, it was butchered by the previous owner who added a pickup from a Fender bass to the original, and it can give you quite a shock, but my god it is so awesome. Sounds great and is really nimble, so great for melodic playing. When I bought it, Gibson basses were so out of fashion they practically gave it to me, it was so inexpensive. That was over 20 years ago. Oh yeah, it was an effort finding an amplifier it sounds good through, took absolutely ages…"

"Wow, Mars with 20 songs, I’d probably pick some epic long songs like Thick as a Brick or Atom Heart Mother, I mean 20 x 2:30 songs won’t go too far on any one-way trip. If everyone else on Mars colony also has a 20-song allocation, we could also use the longer songs as barter. They could be like currency, I mean if that doesn’t put the prog in rock nothing will. In all seriousness though, our musical tastes have expanded so much since we became involved in the indie music community on Twitter, so would have to say as broad a range of music as possible, across genres."

"What time is rehearsal and do you want me to bring the supplies? Seriously, I’d probably ask about their interests outside of music first, as they are probably bored to death talking about their music (especially with other musos, I mean can you imagine how detailed and music nerdy the questions to say Mick and Keith would be? I could ask them questions
for hours without stopping for breath). I guess it depends on the person, too.

I mean if it’s Keith Moon (and he were still with us) I’d ask how the hell he got that Rolls Royce up those hotel stairs so he could drive it into the second storey swimming pool."

"Eddie Vedder. We saw him at Wembley a couple of years ago and he was playing acoustic guitar on his own in front of ninety thousand people. Spellbinding."

"Funniest for us was at the very beginning, with our first demo. We booked a studio in Sydney for a two-day session. We walked into the office and arranged the booking with a guy called Bob, who it turned out later didn’t actually work there. He assigned us a sound engineer who was amazing at indie film soundtracks and film scores, super eclectic guy. Anyway, we got there at midday and didn’t even start recording until near 8pm. The guy was spending hours trying to get the perfect room sound, and he had some insane ideas, such as strapping a microphone to the drummer’s heart to catch the sound of his heartbeat, and another taped to a piece of corrugated iron. We finished the first day at about 3am. The next day was quicker, but there was still this super long delay while he adjusted the microphones. I mean it wasn’t funny at the time, I mean we sort of thought this must be how the professionals do it, but it’s so crazy it cracks us up every time we bring it up these days."

- That cracks the living daylight out of me, hahahaha! XD  -- Ann

If you could turn back the clock, which musical year/decade would you choose?  Explain.

"1970s, for several reasons. It was still a time of true innovation in music, when rock and roll (in the wider meaning of the term) was young enough that it could still spawn numerous new styles and movements. Artists across the genres (even disco) treasured the album as an art form, and the relationship between albums and singles. Video in the way we know it now wasn’t really a thing, which for us would be awesome, although we’re slowly coming around to video (I mean, we’re musicians, not actors). Also, the Top 40 really meant something (when any style of music could be on there) and you could choose the music you liked in the styles you liked, as opposed to being funneled towards a pre-conceived idea of what someone of my customer profile should like. Also, to be honest, the sheer excess of the 70s."

BONUS Q:  What one word will best describe you as a band?