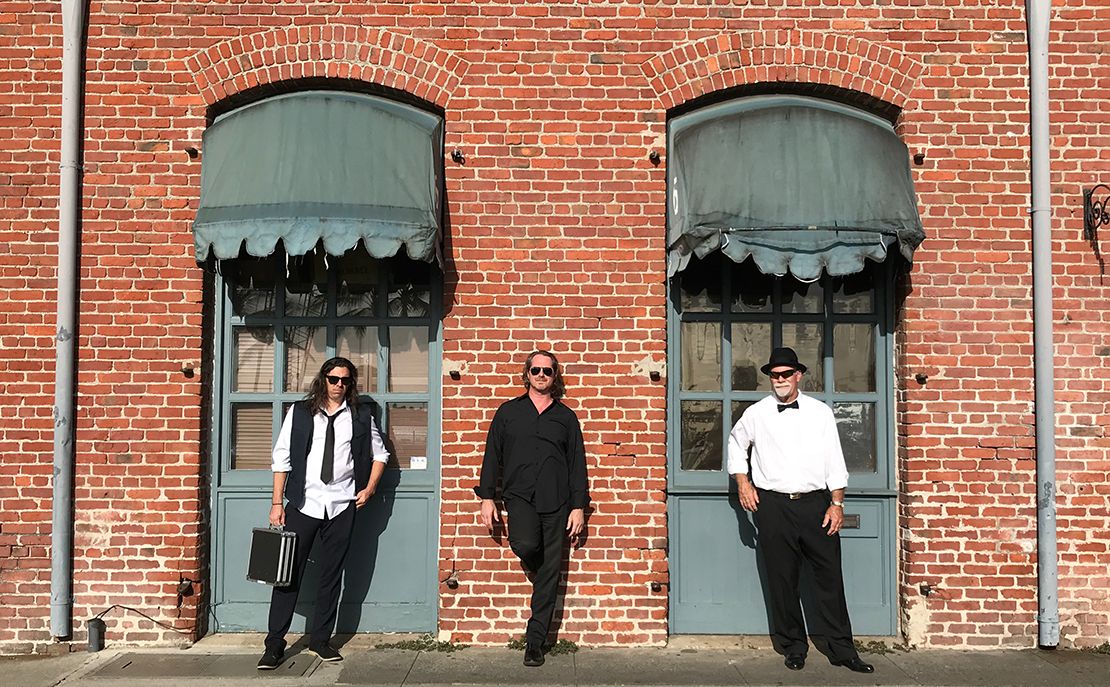 Another proof of solid friendship and teamwork is the band, Executive Order.  As trios, they rock the Indiedom with tracks that are at par with the legendary icons you'll associate with once you hear them! Even their mellower tunes could not deny the hint of ruthless riffages seething through each prim progression. They are so ready to blaze a scene anytime!  Upon my invitation, their front-man, Joseph, took charge to answer some from my list of prepped band questions, which I am excited to share with you all:

"Thank you very much for showing interest in our band and for the opportunity to share who we are. I'm the lead singer and song writer, Joseph Olson. Executive Order is an independent band, made up of a group of friends with experience and influences that span multiple decades and genres. Bassist James Christian has been on the scene in Hawaii since the '70s. As the singer/song-writer I started playing in LA with a high school band in the '80s, and guitarist Rich Elg took up playing in the '90s. We previously played together over the years, in different renditions of bands and performed at Honolulu's Hard Rock Cafe, Jazz Minds, Surfer The Bar, and other fun, local venues. The diversity of our sound comes from all three of us. To varying degrees, we were influenced by rock, Blues, RnB, funk, pop, Motown, and the Seattle scene. All of these influences have given us an eclectic sound. Recently one of our fans described us a having an 'Alternative Classic Rock' vibe with a bluesy/funk feel. We'll take that too!"

"Originally our debut album was to be titled 'Wicked.' However, during the production phase, the unrest in the US, the pandemic, and other global crises became so unsettling that we as a band felt strongly that, 'All Bleed Red' needed to be the title of the album. While we, as a band, try to remain apolitical, changing the album's title was a statement we all felt very strongly about. It was a small gesture that we hoped would make people feel more connected during such a critical time in human history.

A huge epiphany for us as a band is how we had to market and release an album during the COVID-19 pandemic. Because we could not perform live and do all the release events we'd planned, we had to approach releasing and marketing our music very differently. We ended up having so much more support from fans and other indie artist from around the world than in our own hometown! This is a lesson we will hold close. Thinking globally and acting locally is something that has always been near and dear to my heart on a personal level. The past year has validated that. We are so grateful to all the amazing people we have "met" across the globe."

How do you organize yourselves as a band and come up with great tracks?"

"After our previous stint playing together we each went on to flourish in our day-jobs and became more family oriented. We eventually found our way back to each other to just jam and reconnect as friends and musicians. For some people heading to the pub for happy hour is how they unwind. To us, meeting once a week in a practice space or a recording studio to just jam and discover was our thing. We started joking about making the next 'one-hit wonder,' and eventually we started putting more intention behind our sessions. I reached out to an old-friend from my LA days and sent him some of our numbered jams and riffs. He jumped on the band wagon telling us we had something going. The next thing we know, we have a producer getting us into shape and directing us on which songs to select and formalize. It was an amazing journey from conception to release and best of all it was fun and very fulfilling."

"As a songwriter, I love just letting the musicians start jamming on a riff and then I write the words to the 'movie' they create in my mind and in my heart. We inspired each other through our experimentation and willingness to be open and accepting with what each of us brought to the table. I know it sounds trite, but All Bleed Red was truly a labor of love. It seemed to flow from a special group synergy, from the first note through to production."

"Some have made the comparison to Chris Cornell, Red Hot Chili Peppers, Van Halen, Phish, and Led Zeppelin. It is an honor to have such comparisons! We hope to hear many more comparisons as we cannot help but channel our influences. I mean, heck...we have decades of osmosis in our musical careers and backgrounds.

If you find it of interest, here are a couple of quotes:

'What do you get when you mix the guitar tones and stylings of Van Halen, the groovy bassline of Led Zeppelin, and a voice that would be at home within the 90s grunge era? In this case, you might find yourself a hair closer to describing the wide array of sounds within rising band Executive Order’s grasp. Bursting onto the scene with their debut album All Bleed Red, the band boasts a sound that is as hard to pinpoint as it is to get out of your head. Lead single Some Like It Hot is a massive indicator of such.'"

'The touches of rock groups such as Led Zeppelin and Van Halen are evident, but the band’s own unique makeup from Los Angeles and Hawaii takes these acts up a notch by throwing in a melodic flavor all their own.'"


If you are not doing music, what are your other interesting diversions?

"Rich and I both have day-jobs in Information Technology and Jim has a landscaping business. For me personally, if I'm not working on the music business I'm enjoying fishing, long walks exploring, and binge watching science fiction and sports." 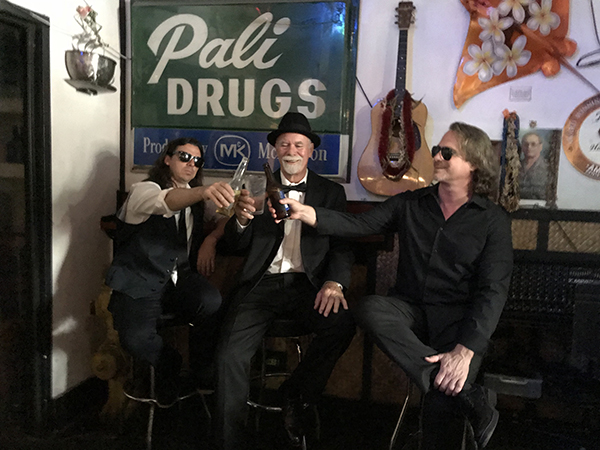 "I would have loved to meet Prince. He was an amazing artist, he knew the effects of music going to streaming, he was super business savvy, he was from Minnesota and loved the Vikings football team (my fave team too). I would tell him how much he motivated me as a musician and a performer and how much his business acumen I admired. I would thank him for creating the songs that are forever written on my soul. "

"Dave Matthews Band..hands down! They are just so diverse with their instruments, musicality, and songwriting. They are really top line musicians that could take any song from any era and just go to town."

"HOT music, to me, is what resonates with a person and makes them want to respond or react by singing, dancing, playing air guitar, or even just talking about the song. Now thats really

"Surviving a global pandemic while trying to remain a viable band. Whew! That has been difficult with social distancing, but we did some creative things to be together such as regular video conferencing and doing some covers individually and putting them together. None of us had any experience doing that and we learned so much and stayed in touch."

"Kind of Honest is a very interesting track. The song was originally written as a much more upbeat tune (originally 120 bmp and now around 75 bpm) and very much in the feel of Alanis Morrisette’s style when she did Jagged Little Pill. When our producer, Michael Cutting, heard it he had a totally different vision. He took us in a direction that culminated in the current tune. The end product really shook us and our early listeners… in a good way! We are so grateful to have him as our producer and this song showcases how a great producer can be band’s best friend."

Name your top 3 most influential musical figures of all time.

"Jim has shared that his biggest influences are many, and you can hear it in the unique bass vibe he brings. But to narrow it down to three would be Jimi Hendrix, James Taylor, and Leland Sklar. From under his dad's influence our youngest (and old soul), Rich would say Led Zepplin, Neil Young and Eric Clapton. For me it has to be Van Halen, Alanis Morrissett, and Jim Morison. Van Halen and Alanis Morrissett were extremely influential in my musical journey and it is Jim Morrison that I feel like I am channeling in live performances."

"1.  I’ve Got to Have You. From a musical point of view, I always loved the bass line. It has a nice grove and when working with the drums and guitar creates a groovy love song. The lyrics come from my personal life and relationship, but I did struggle with one line. It took months of our producer saying, 'Nope that’s not it...' Until one day, WHAM, I was rewarded with, 'That’s it!' for the lyrics, 'I have a song in my soul, it’s yours.'

2.  Wicked. The dark feel, the way the solos come in, the provocative theme of the lyrics just make it for me. It is fascinating to think of people listening to the song and getting lost in thought, movement, or sensation.

3.  Shake It. I loved the way the guitar has many tones and creates a great fun, sexy vibe. In the end it’s all about just shaking that booty! We hope it makes everyone want to get up and just SHAKE IT!"

What one word best describes you as a band?

"Provocative. We hope that our music and lyrics provoke conversation or a sense of fun, freedom, sensuality, letting go, or whatever the listener wants to take away. It is our hope that each listener makes each song their own. That would be so awesome!"

What's next for Executive Order?

"Right now we are working our next music video for Some Like It Hot and settling on some new artwork for merch. We are also looking at potential locations internationally to perform. Our horizons have been so expanded!"